In September 2016, the Paylab international salary survey analysed the salaries of senior management in nine CEE countries over the last 12 months, it found that the top managers in Prague and Bratislava have the highest pay cheque.

Employees in capitals consistently have higher salaries. The amount on the paychecks is 20 up to 30 percent higher in comparison with the average country salary. Among the surveyed countries in Central Europe, employees have the highest earnings in Bratislava, where the average gross salary is €1,400. Similar amounts are also in Tallin (Estonia) and Prague. Belgrade ranked last among the surveyed capitals, with an average gross salary of €736. 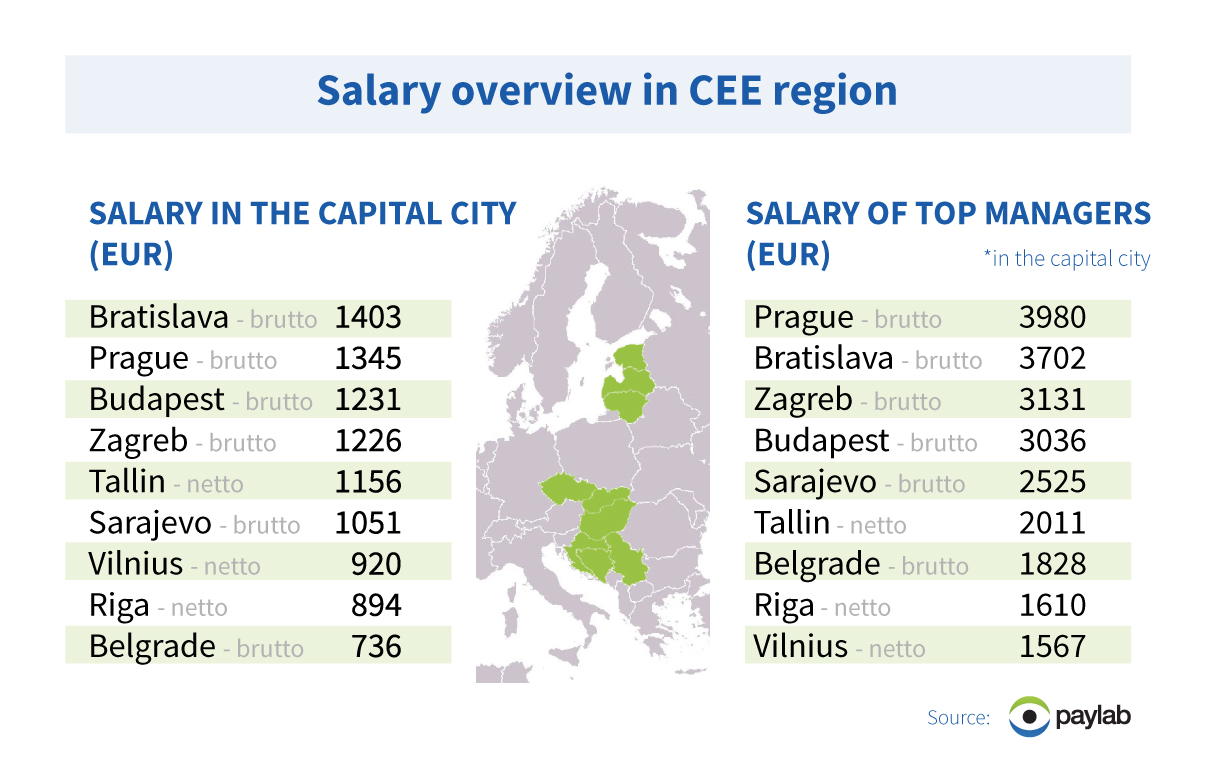 Top managers in the Baltics area have the lowest pay cheque in Vilnius, Lithuania, with only around €1,567 netto. Their colleagues in Riga, Latvia, achieved a slightly better result with an average of €1,610 netto. Of the three Baltic States, Tallinn, Estonia, has the highest income in general, with top managers earning an average of €2,010 netto. It is interesting that of the countries surveyed, the Baltic countries show the smallest vertical difference between average salary in the capital and the income of top management: the average salary of managers is only 1.7 times higher than the average salary in the capital.

Paylab is an international salary survey platform that collects information on the incomes and bonuses of employees in various positions. Paylab uses a unique methodology for collecting data with a three-phase control and over eight years’ experience. Visitors to the Paylab website or partner sites in their country can easily and anonymously complete an online questionnaire on their salary, and compare their income with the national average for that position. The system always uses current data for the last 12 months. The independent salary analyses are then used by companies for the appropriate internal setting of salary levels for individual work positions.

Paylab salary survey was established in Slovakia in 2007. Profesia (the largest job board in Slovakia) created the methodology for collecting, aggregating and processing the data for Paylab. The salary survey in Slovakia was subsequently complemented by the Balkan States (Bosnia and Herzegovina, Croatia, Serbia, Slovenia), Central Europe (Hungary, Czech Republic), and the Baltics (Estonia, Latvia, Lithuania). Finland, Kenya and Slovenia are the most recent countries to have joined the Paylab salary survey. Profesia – which launched the salary surveys – has been on the Slovak market since 1997, growing into the biggest and most popular job portal. It also operates in the Czech Republic (Profesia.cz) and Hungary (Workania.hu). Since November 2012, Profesia has been part of Alma Media – the Finnish media group. Alma Media publishes several prominent Finnish newspapers, and also focuses on digital services. As well as journalism, the company’s product range includes useful information for lifestyles, careers and business. In addition to Profesia, Alma Media has shares in job portals in the Visegrad countries, Baltics, and Balkan States.